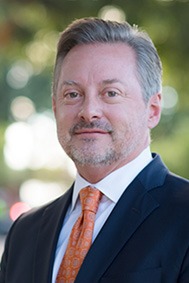 R. Scott Magee has been a lawyer in private practice for more than two decades. Prior to coming to the Austin area, he worked in several law firms in Dallas, Texas. He has been involved in litigation for his entire legal career, working on family, professional liability, personal injury, and criminal cases.

While in law school at Texas Wesleyan University School of Law in Ft. Worth, Texas, Mr. Magee was a member of the law review, served as a research assistant, and graduated in the top 15% of his law school class.

Mr. Magee also holds a Master of Public Affairs and Bachelor of Science in Public Administration from the University of Texas at Dallas.

Mr. Magee has also served in city government, as Assistant to the City Manager and City Manager, and as an adjunct lecturer in Politics and Government at several Texas universities and colleges. See what clients have to say about working with Georgetown and Williamson County defense lawyer, R. Scott Magee, by reading our testimonials.

We serve clients in:

Testimonials
"Michael & Liz were very responsive, compassionate and explained the process and options to us all along the way. Their skill, communication and relationships in Williamson county enabled the case to be closed in record time with a fantastic outcome. I would recommend contacting them first over any other law firm. GI"
Gregory Ingram